Some further test running undertaken this afternoon, during which it became apparent that the LNER had more influence in supplying the light railway with motive power than first thought. Normally it would be very unusual to see two light railway locos in this BR yard. 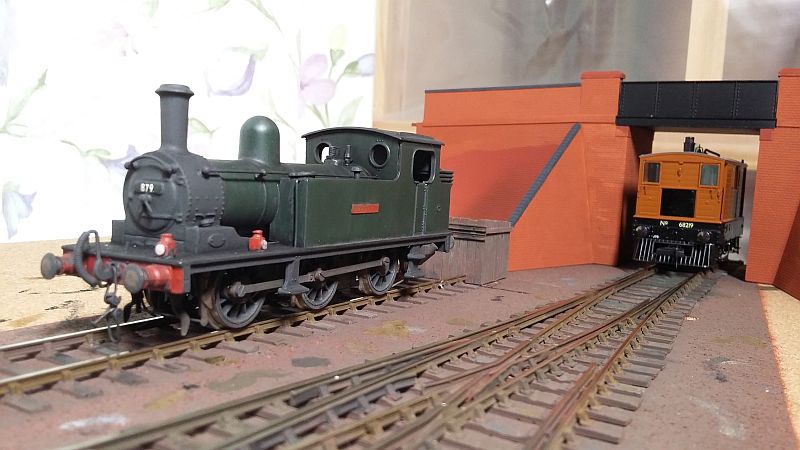 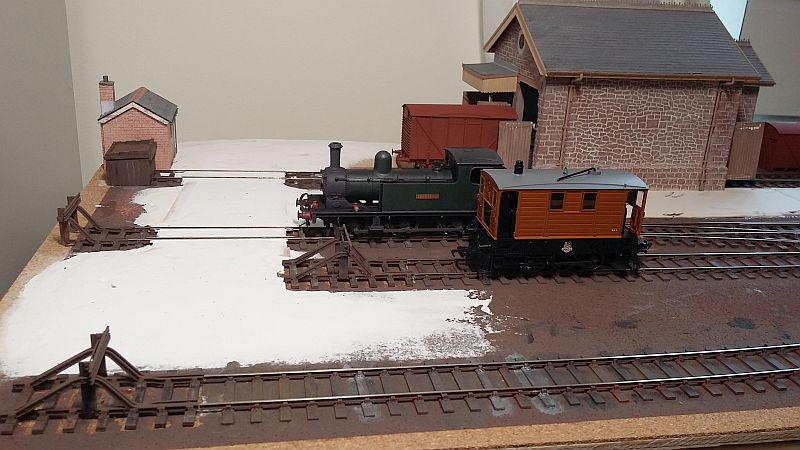 I rather like the William Morris back scene in the top photograph.

Sadly the GER loco won't actually see any use in the near future, because with back-to-backs of 14.75 mm and the wheel profile that Rapido have used, the loco doesn't like the OO-SF clearances on a couple of the tighter-radius points on the layout. I have the same problem with my second Hattons/DJM 14XX (the one with the original chassis), which has back-to-backs of almost 15mm.

This isn't a problem with Romford/Markits wheels, or indeed those by Alan Gibson. Also, Bachmann and Hornby generally seem OK.

I am going to dry pushing the driving wheels together on the 14XX, otherwise that's going to have a new chassis in due course.

I'm not sure what to do about the GER tram engine, other than dismantle the chassis and look to alter the tread profile slightly and re-set the back-to-backs to 14.5mm.

It's a shame, because the tram engine runs really nicely.

Ho Hum. that's a bit of a shame. fortunately it hasn't been an issue on Upwell Drove or Diddington. The forthcoming Yelverton will likely be done to OO-SF standards, but 70's won't run there so not an issue for me fortunateły.
Alex

I've just been testing a load more locos, all with proprietary RTR chassis, plus some of my wagons and all run fine through the pointwork, so I know that I'm not going to need to rebuild the points concerned, certainly not for just one loco that's already in the outrageously improbable category.

This is the current state of play, not much additional progress really, although cobbling of the goods yard area is well underway and the brickwork on the overbridge has finally been painted and weathered (the girders haven't been weathered yet). The buildings aren't yet permanently attached to the layout, either: 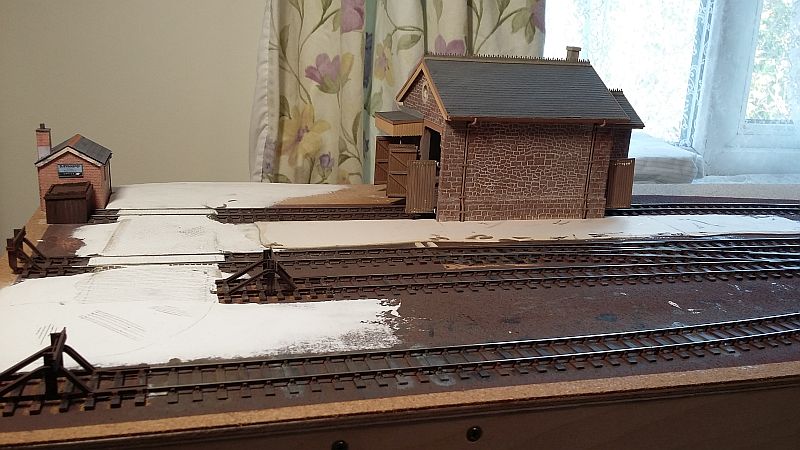 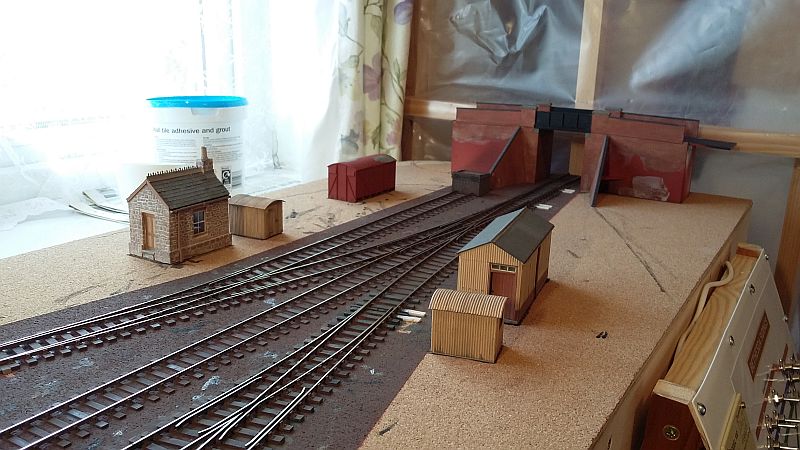 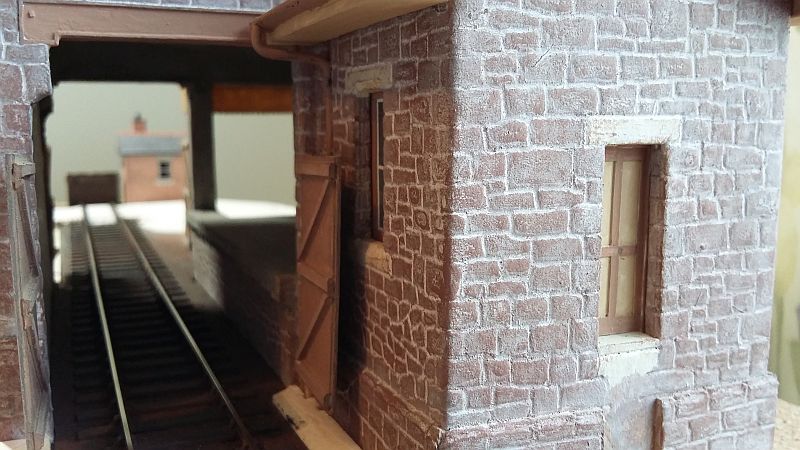 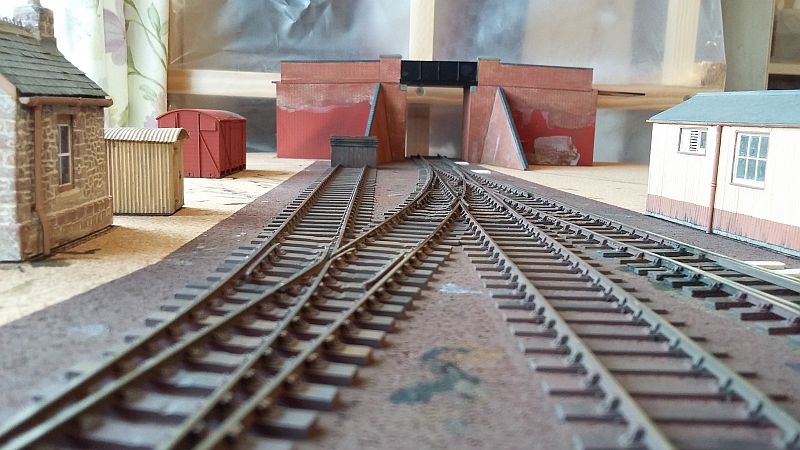 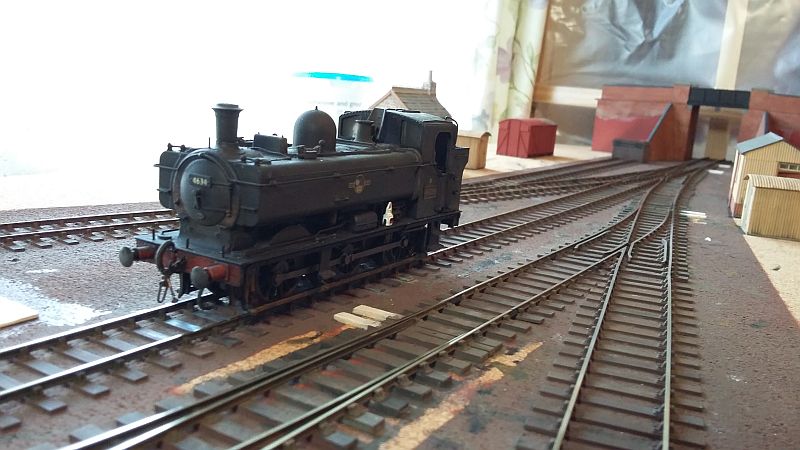 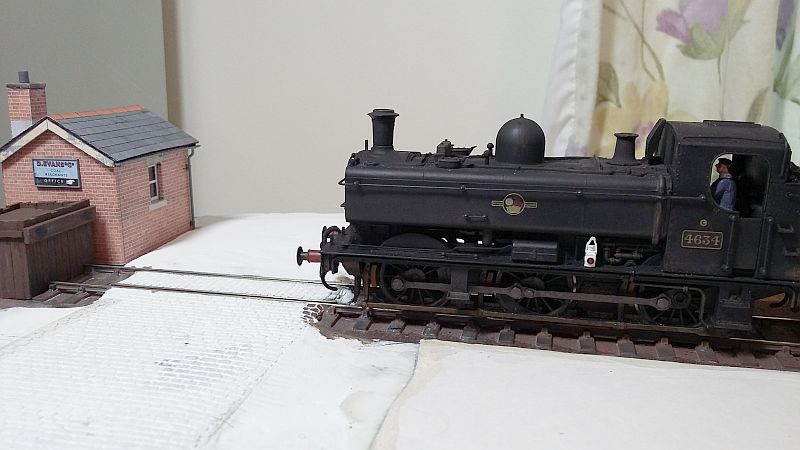 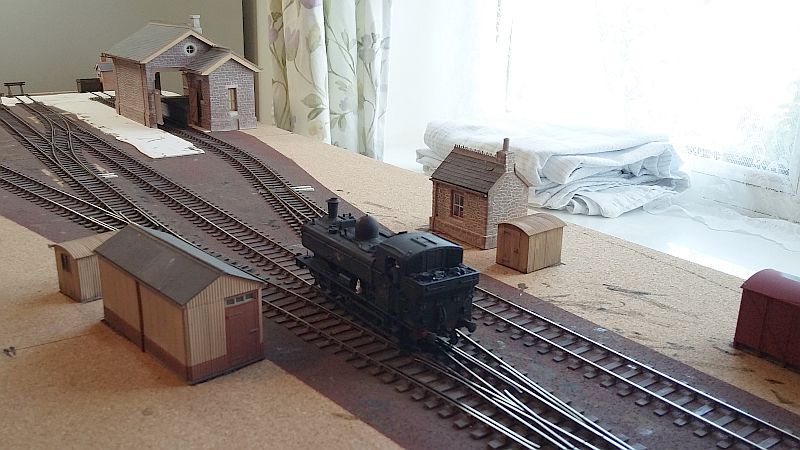 I have finally finished the cobbling and gave them an initial wash with some diluted enamels this morning:

I am slowly getting around to reading the WT threads and was pleased to see the 'Captain' had sorted out his Hattons 14XX with a Perseverance chassis. The DJM design of chassis was unusual (I'm being kind here) and it must hold the record for the biggest waste of money ever.

My final leap into the 0 gauge pool will allow me to own a decent GWR 14XX. Jim Clemens B&R video showing extensive coverage of the Presteign-Kington goods would attract anyone to the class! I had a San Cheng a couple of years ago and it ran like a dream.

LarryG said:
Jim Clemens B&R video showing extensive coverage of the Presteign-Kington goods would attract anyone to the class!
Click to expand...

Superb bit of footage, isn't it?

The 14XX is now completed, with the weathering having been finished earlier this week. This is a loco that has been kept in pretty good condition by the local shed but has a fairly light covering of dirt: 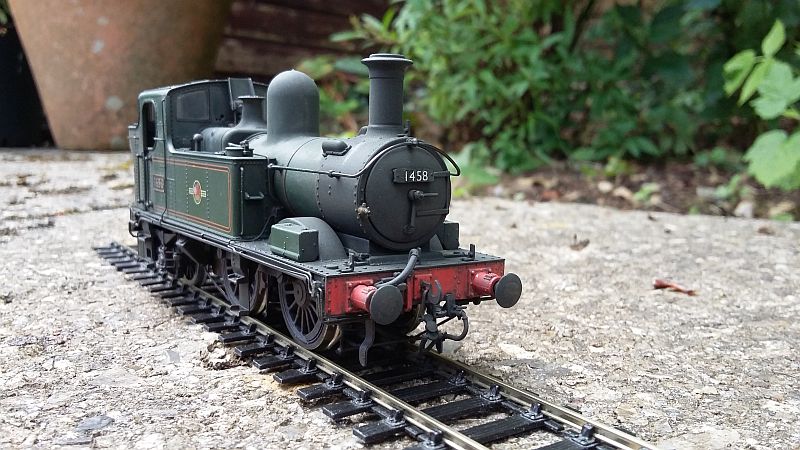 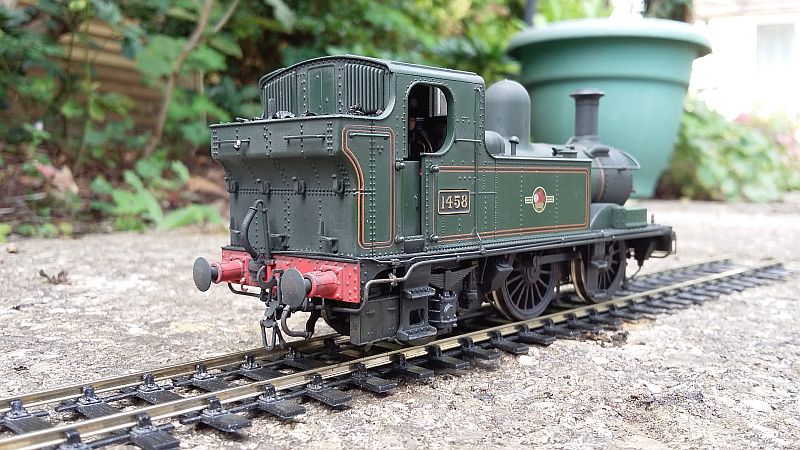 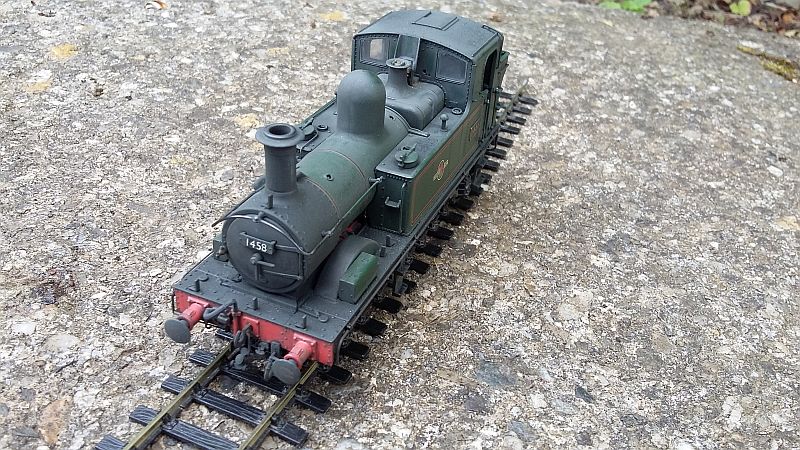 I've now got my backscenes for the layout. This is thanks almost entirely to Andy York, who very kindly stitched a series of landscape photos I took in the Mid Wales and border area last year. I managed to remove a couple of modern vehicles myself and Andy has photoshopped other stuff out that was 'too modern'. He's also adjusted the height of the backscene relative to the planned topography on the layout.

Finally, he separated the landscape part from the sky and has sent me two versions, one with a nice blue sky and the other with a (more typical) overcast sky. In both cases, the landscape colours have been muted down.

I've had them printed by a local printer, who told me that his roll of material (a kind of smooth canvassy, plastiky material that is very durable) was 2' wide. Fortunately, the backscene is only 12" high, so that meant that I could accommodate two 7' x 1' backscenes on the same print run, in other words, two for the price of just one! As such, I plan to be able to swap backscenes, depending on mood.

No photos yet, because the layout isn't ready to have the backscene put in place, I need to tidy things up and put the backscene boards in place, which will have to wait a few days. Current modelling efforts have been focussed on assisting the 'Balcombe and Ouse Valley Viaduct' team in preparing for Scaleforum in three weeks time.

Now that Scaleforum is over, I have resumed work on 'Bethesda Sidings' and did a bit more ballasting today: 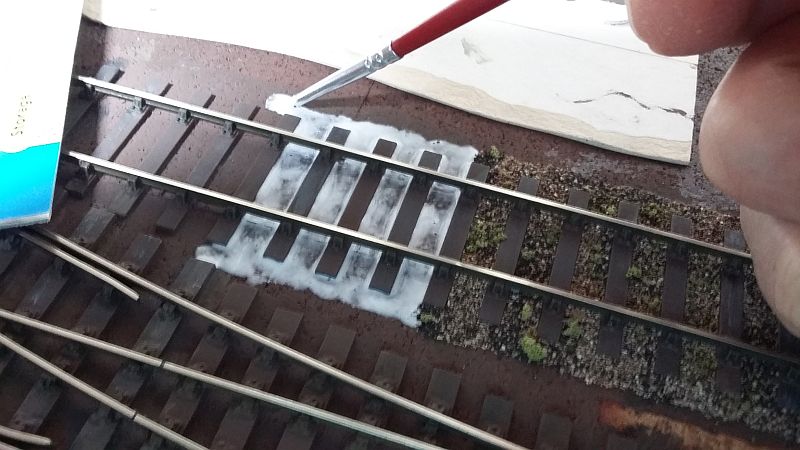 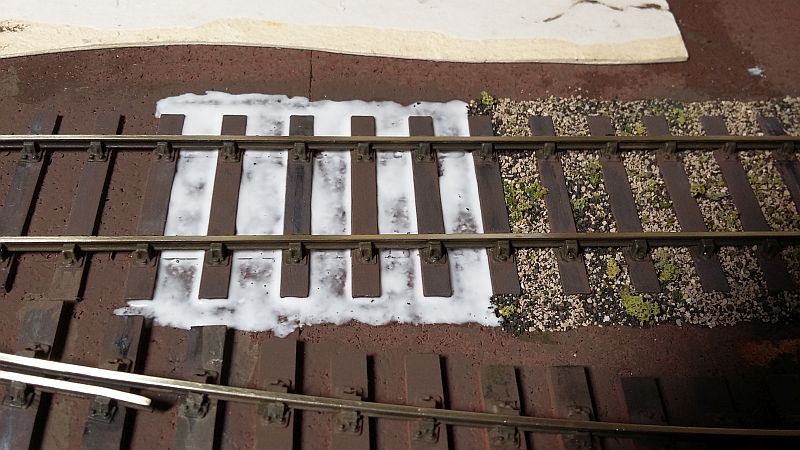 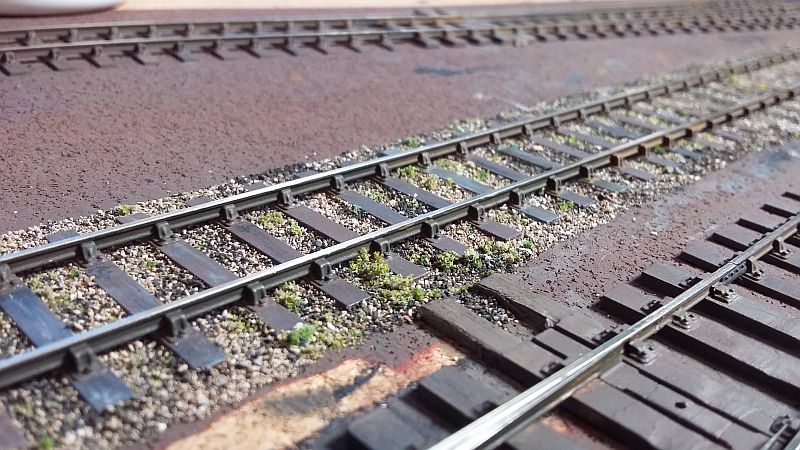 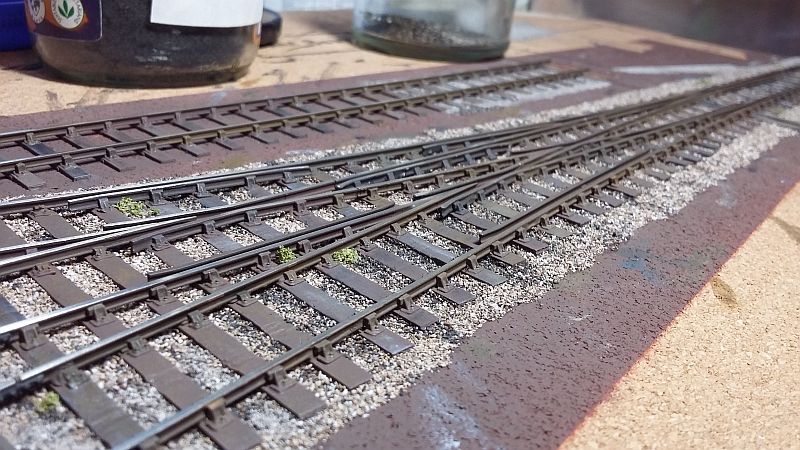 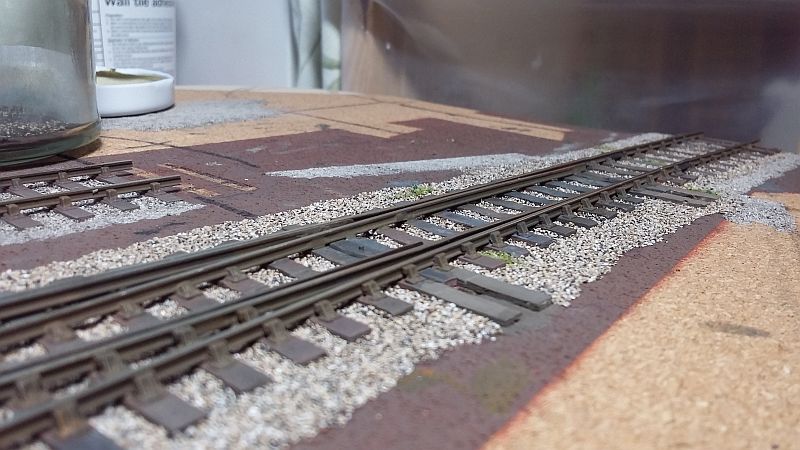 That looks absolutely splendid. I have to say that is probably the best laid and weathered trackwork I have seen in a very long time.

I was just about to write the same Rob. I hope I can get near to that on Blakeney.

Lovely neat work Tim, ever since I read your account of ballasting the track on 'Engine Wood' I have used your methods. As a matter of interest what ballast are you using there?

Agree with the above, the track and ballasting is stunning!
I'd like to try that method, I'll have to have a look at 'Engine Wood'

Thanks for the kind comments, chaps.

Geoff - it's a mix of (mainly) two shades of Woodland Scenics 2mm ballast, with some real ash included in some places.