As the previous Thread on the new Minerva D95xx/Class 14/Teddy Bear has been locked, I thought I'd start another one

...but not to debate the cab colour and various errors, but a sort of 'put it right' thread.

Whether or not such things should need doing to an expensive R-T-R model is a moot point, I suppose, but as Grytpype-Thynne said in the highly esteemed Goon Show - "Don't point that moot at me, Moriarty!!"

I digress.... Bullet well & truly bitten in the Servant's wing of Jordan Towers....
My Teddy Bear is in bits, and cab removed for remedial works, especially the 'wrong' door.

Above, the handles have been removed, and pencil lines taken across the door for location marks.
Below, the new lower recessed part has been drilled & filed out, and backed with thin plasticard. The upper handle plate is another small bit of plasticard, and the original handles glued back in place. Original holes filled in with putty, waiting to be sanded when dry.

The roundel has also been removed with 1200-grit wet'n'dry paper, used very wet!!

I found one of the connecting rod retaining screws on the jackshaft counterweight was working loose, & has had to be tightened up. A bit more lube on the worm & gears has also helped smooth the running as well.
There are other plans too. The windscreen wipers are rather small, and some of the brake pipes rather undernourished. There is no mesh behind the cab steps.

Feel free to add your pics of what you do to your Teddy Bears to this thread.....

There will now be a short intermission while I wait for fresh paints to be delivered.

I am trying a non-railway Sherwood Green, since the Railmatch Sherwood Green is about as accurate as the legend of Robin Hood, from what I have seen & read.

I see precsion paints still do a sherwood green

I think that's what I used before on my PRMRP 14. But it's enamel which I can't use indoors, so am going for acrylic options. I have some waterslide roundels - somewhere!! Will have to dig them out too as I've no idea what make they are!!
I did think of running just the side with the correct door facing me all the time - something I do with other stuff, but I'm highly likely to give this loco different numbers either side, to 'double' my fleet, the cheapskate way!!

(except double-heading is out, of course!)

Going to try this Sherwood Green... 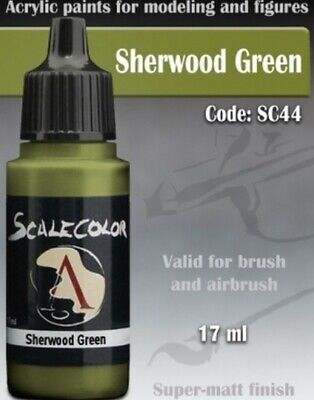 <p><p>Scale 75 water-based acrylic paints are specifically designed to provide efficient coverage and a smooth finish. With a wide range of colours available across their 3 different brands (Scalecolor, Metal & Alchemy, and Inktensity), they are the perfect addition to any painters...
www.ebay.co.uk

Adding the crew....
If you want a Driver who's arm is resting on the desk controls, some modifications are needed. The cab floor & seats are one molding, but the desk is attached to the cab wall, and lifts up with the cab on removal. So you could sit a driver on the seat as supplied but his arms would have to be by his sides to clear the desk as it lifts.
I have changed this. First the cab interior wall & desk had to be released from the cab itself, they are only lightly glued in place. Then I removed the one seat from the cab floor, and glued a piece of plastic angle to the side of the desk. The driver (an Omen Figures model) is glued on the angle.
Once dry & solid the whole lot can be fitted back inside the cab.

On my PRMRP 14 the one cab door was open with the Secondman standing in the doorway. Moving the handles was enough hassle on this one, so he's still in the doorway footwell, but it must be cold outside as he hasn't opened the door yet...

The cab wall can't just slide up inside the shell, and the last photo shows why - there are cutouts in the cab floor, to allow for the locating blocks that are in each corner of the cab shell, that the cab screws to the footplate with.

Before you start ripping them apart I suggest a good run in is required. Mine lasted ten minutes before it sheared a crank pin.
:-(

Due to a number of faults that arose when I adjusted the CVs to dim the lights including having both route indicators on at the same time, together with the excessive rocking motion and a loud click from the motor, I decided to return my model for a refund as I did not want to suffer the same protracted experience that I had with the Lionheart Mogul. A real shame as I have always liked and wanted a Class 14s.

Cliff Williams said:
Before you start ripping them apart I suggest a good run in is required. Mine lasted ten minutes before it sheared a crank pin.
:-(
Click to expand...

That's a shame Cliff. Are you going to repair it or return it?
John

...but not to debate the cab colour and various errors, but a sort of 'put it right' thread.

Please can we stick to improving the model as is, as not wandering off into the woes or otherwise of production faults etc.

What Jordan is doing is really interesting and relevant to WT, the other stuff is not.

Simon said:
Please can we stick to improving the model as is, as not wandering off into the woes or otherwise of production faults etc.

What Jordan is doing is really interesting and relevant to WT, the other stuff is not.
Click to expand...

John K the credentials of Minerva customer support were never in question.
To save cluttering up here I will ping Simon directly to discuss his reply.

I must admit, I was on the verge of sending mine back, but decided to stick it out.
I found the clicking noise was the back of one of the pins on the connecting rods hitting the jackshaft weight as it went round. Tightening the loose pin - which was on the jackshaft itself IIRC, mostly cured the problem, which I suppose was due to misalignment of the rod because of the increasing slack, but I think the back of the 'clicking' pin might still need a bit of filing.
The waddle I will live with; I think some of the wheels aren't quite square on the axles, and a cab ride video I saw on YouTube seems to indicate the real thing did that a bit as well.
I'm not using the lights or DCC, so can't comment on those matters.

.... Is it possible when the Cl 14 was originally designed the doors were correct as depicted on the model and they got changed around in production. Or is it just a clunker at the model design stage?

Anyway, your solution appears to be very simple, dare I say satisfying?, but annoying fix.

Removing parts in order to access the cab interior

- a bit like working on a car exept you do have to remember which parts go where after removing them to fix the part located in the depths of the engine bay.

Yorkshire Dave said:
Or is it just a clunker at the model design stage?
Click to expand...

It's just a clunker.

Simon said:
Please can we stick to improving the model as is, as not wandering off into the woes or otherwise of production faults etc.

What Jordan is doing is really interesting and relevant to WT, the other stuff is not.
Click to expand...

As I see it raising some of the faults are pertinent to this thread.
Cliff says his model sheared a crankpin; I certainly found one that was loose, and would have unwound itself out completely if I han't spotted it. I'm glad I caught it when I did because trying to put it back in it's hole would've been a tedious task I think, with my basic tool kit. If it had sheared off and left a bit in the hole I'd have been stuffed. I then checked all the others were tight too. I had to use flat end tweezers to do this.
This issue was also relevant to Mike's post about a clicking from the motor; as I posted earlier I found it wasn't from the motor at all, but it didn't cross my mind to post what I found until after I'd read Mike's post.
So as long as posts here don't just become a moan about the model, then posts raising faults and issues - and looking for ways to overcome them - are entirely relevant, I think.
Last edited: 15 February 2022

Agreed, it's a reported issue that needs addressing - it's not like it's being sensationalised.

Or is it just a clunker at the model design stage?
Click to expand...

Dapol got the door handle on the wrong side with the 08 as well.

I completelye agree Jordan, and I have no desire to shut down, limit or impede any conversation or discussion, but:

That's a shame Cliff. Are you going to repair it or return it?
Click to expand...

Dapol got the door handle on the wrong side with the 08 as well.
Click to expand...

Adds nada to the discussion in hand.

And it's boring and dull.

Isn't the Guild forum the correct repository for this sort of guff?

Sorry, that may sound grumpier than it ought to be

Ahh. So we're allowed to discuss the modifications we're making but not the reasons why they're needed. Got it.
Dave

To be fair, the raising of issues and equally importantly the resolving of these issues is really useful. The way this is done on WT seems to be far more objective than on the other channel .